My Sansa Fuze+ died a few weeks ago (maybe a week after putting Rockbox on it...) and it doesn't look like I'll be able to fix it. So I'm starting to look for a new mp3 player. I'm doing my own research, but I also wanted to ask for any recommendations here! I only have a few requirements:

A lower price is a plus, too. I don't care about playing videos, recording, listening to radio, etc. Touch controls are nice but not required. My music collection is just about entirely in mp3 format.

I first made this laptop dual boot to Ubuntu about a year or two ago, I forget how long ago. But the first time I did it, I didn't give it enough memory, and had to get advice on how to expand the memory Ubuntu got. Well, I'm finding the 10 gigs I gave it a little restrictive now, and I have no clue what happened to the original instructions on how to expand that. So if anyone could help me with that, I'd be very grateful.

I did this dual-booting thing automatically with the install disk, if that makes a difference. Oh, and the Windows side is Windows 7.

Ubuntu desktop using Cairo-Dock. You can find Cairo-Dock in the Ubuntu software Center. I am really enjoying Ubuntu 12.10 and can't wait for Ubuntu 13 to be released. Happy computing everyone :) 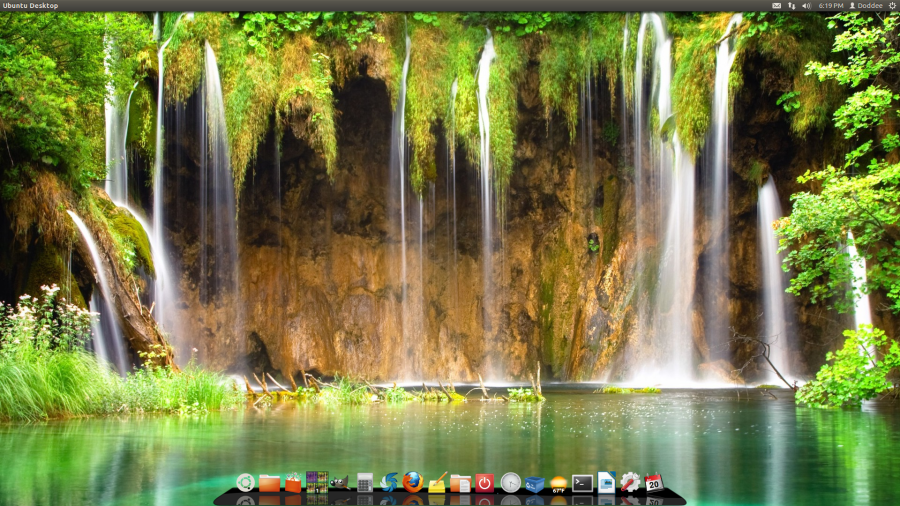 I've been using Ubuntu for a few months, but still I'm essentially new. I'm not a programmer at all, just someone who got tired of Windows constantly effing up even though I ran frequent virus scans and stuff.

I like Ubuntu very much, so far... but one problem I have is my laptop (which dual boots Windows/Ubuntu) can't network with my desktop PC (which runs Windows 7) when it's on the Ubuntu side. I tried, at first, installing the packages that it said were missing. I tried many times, and they refused to install. That was about a month ago.

So, I need someone to point me at (or provide me with) what to do, that's written for the everyday person. Samba for dummies, I guess you could say.

Hi, I am having trouble with version 20.0 of Firefox.  I have session manager as an add-on, with the options to restore my windows/tabs from last time in both Firefox preferences as well as session manager.  However, in the last few days, session manager no longer seems to function: it is not creating backups, when I restart my browser it just brings up the homepage and not my old tabs, and it doesn't have my closed tabs list anymore (it acts as if I haven't closed any tabs at all).

Does anyone have any ideas on how to fix this?  The restore session function is a major reason I use Firefox!

I am running Ubuntu 12.04LTS.  Thanks!
Yamaha is going to launch YZF R15 in four new exciting colors and old colors will be vanished now. The new colors are awesome.

Today I burned two car CD for my father's car in a CD shop.The songs in the CD are selected by me carefully int the Internet.Most of them are from the Voice of China.My father is very satisfied with the songs and he seems very happy with the two CDs.

Later this morning we went to pay a visit to my uncle.My cousin, who has been far away from home for nearly a year, had come back.I miss him because he is one of the cousins that had been influencing me greatly in my growth and this big family is going through some kind of tough time.

Sometimes I think that my father is very busy and tired because the two families are going to have more and more problems as the old people are growing older and older.It's wired that the older the people are the more bad-tempered they will become, which is contrary to the idea that I learn from textbooks.According to the books,when people become older, they will see things in a more broadened horizon as they had been going through a lot of challenges and hardships.But the fact is that my grandma is becoming a woman that my father hates.I don't think I can do anything.It's a pity.

My mom is really a hardworking woman.She is a good ma, a good wife, a good person who can deal with a lot of complicated relationship of the complecated family.I recognize I am not familar with the stuff and I try to avoid being involed in it and it's noisy.

Is it just me, or is Eclipse 4.x still super flaky? It randomly selects blocks of text when I click to position the cursor, sometimes stops displaying menus and tooltips, and a whole slew of other annoyances that never troubled me on 3.x.

I just started having this problem about 30 minutes ago.  I am running Ubuntu 12.04 LTS, and the update manager came up while I was working saying I had important security updates to do with Firefox.  I told it to run, but it does that thing where it greys out the window because the system's thinking too hard, and wouldn't work.  Eventually, it came up with a box that said there was a system error detected (no idea what), and the CPU was making a weird dah daaah dah sound while doing nothing.  I killed the process for update manager, retried it with the same results, restarted the computer twice (each time, it made the noise while logging on and took much longer than it usually does).  Update manager still will not work properly, and when I try to run synaptic, it asks me to authenticate but never brings up the window.  I have no idea what's going on, but it doesn't sound good.  Any ideas?

Okay, new question: I can't seem to find an option for a screensaver in 12.04LTS.  I installed the Fspot programme I used in 10.04 for my screensaver, and it says I can set it as the screensaver, but that doesn't work.  I've searched the Software Centre and nothing exists on screensavers.  Where is this option?
Collapse